Induction into the Australian Aviation Hall of Fame.

Sir Robert Norman was inducted into the Australian Aviation Hall of Fame (AAHoF) and Bush Pilots Airways was presented with the Southern Cross Award at a gala event in the Temora Aviation Museum Hangar on Sat 12 November 2016.  Sir Robert’s family attended as well as Ron Entsch and his daughter Jenny and about 35 other former Bushies staff and partners.

Steve Padgett, the Chairman of AAHoF and Co-founder of Alliance Airlines and Scott McMillan the CEO of Alliance, generously provided a Fokker 70 aircraft free of charge to fly Sir Robert’s family and ex Bushies staff and partners from Brisbane direct to Wagga Wagga on Saturday morning and return the following day.  At midday we were all welcomed at a Mayoral Reception in the historic Council Chambers in Wagga Wagga.  Mid-afternoon we were all bussed (courtesy of AAHoF) about an hour north east to the Temora Aviation Museum for pre-dinner drinks and canapes while watching a flying display by a restored Boomerang WW2 fighter.

We were then piped into dinner in the Museum Hangar to enjoy the evening’s festivities and Induction ceremonies and later that evening bussed back to our accommodation in Wagga Wagga. Ron Entsch made a speech after accepting the Southern Cross Award and all the ex Bushies staff and partners got up on the stage for group photos.

The following morning we flew direct from Wagga Wagga back to Brisbane – again courtesy of Alliance Airlines.

Lionel Dyer adds
Former Bushies employees were well represented at the gala event in Temora (NSW) on Saturday 12th November 2016 when Bush Pilots Airways and Sir Robert Norman OBE were inducted into the Australian Aviation Hall of Fame. There was a great response to the call from Ron Entsch.

However, the logistics of travelling from the far north of Queensland to inland New South Wales presented a lot of challenges which made it impossible for those of us from Far North Queensland to attend.

So, celebratory drinks were organised at the Edge Hill Memorial Bowls club in Cairns to enable those who were unable to attend the official ceremony in NSW to remotely participate in the event.  This auspicious occasion was therefore celebrated simultaneously in Temora AND Cairns, being the founding city and home of the airline from the commencement of the Airline in January 1951 until the closure in April in 1988.

The gold plaque was provided by NQ Airports and the wording on the plaque was a joint team effort by NQ Airports and former employees of Bush Pilots airways. This plaque is now included in the “Aviation Pioneers” display located at the top of the escalator in the Domestic Terminal at the Cairns Airport. 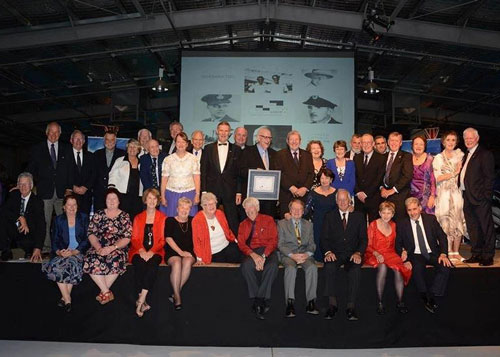 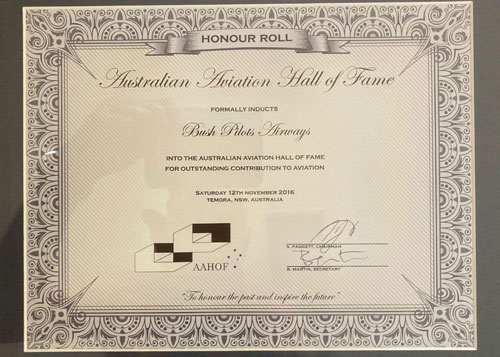