The Tom McDonald 10000 Centenary Air Race was held over Sat Sun 18-19 September 1976 as part of the Cairns Centenary Celebrations.  75 aircraft completed the Race from Cairns to Cooktown, Weipa and Horn Island on the Saturday and Horn Island to Coen then to overfly Mareeba (the end of the Race) on Sunday before continuing back to Cairns.  First prize was $4000, 2nd prize $1500 and 3rd prize $500.

Bush Pilots Airways contribution was to supply DC3 VH-PNM as the “grand old lady” of its fleet and invited ten veteran pilots and hostesses to be their guests to follow the air race.

It was a wonderful sightseeing trip as well for all – seeing the sights at the ports of call, flying over the Outer Barrier Reef and even carrying out a simulated landing at Lizard island.  Ex Bushies retired DC3 pilots Ernie Girault and Chris Braund were among the passengers as were other pioneering pilots such as Jason Hassard , Keith Virtue, Dave Hopton and John Duffy – and of course the lovely contemporary former hostesses.  On Saturday night at Horn Island airport, after enjoying inspirational beverages, the old fraternity shared many war stories and tall tales needless to say.

PNM was crewed by Charlie Batticciotto, Bob Mackinnon and Hostess Alma Kerr.  Brian Williams was the Tour Leader whose primary function was to ensure the passengers didn’t suffer dehydration!  According to a Bushies Skyak Newsletter all the DC3 pilots on board (including Charlie & Bob) had a total of around 138,000 hours between them.  Bob Mackinnon took his famous organ on the aircraft and entertained the crowd at Horn Island that night by playing it until the early hours of the morning.  He had it set up on a luggage trolley underneath the wing of the Ansett F27 and powered by a nearby Honda generator.

Bushies also entered Cessna 210 VH-UBL as entrant No 16 in the Race – crewed by Kevin Shorthouse and Lyle Cooke – with passengers Leigh Robinson and Paul Bunney of radio station 4AM for publicity purposes.  UBL didn’t win a prize but the crew and passengers had a lot of fun.

Of course there was very little accommodation on Horn Island that night for anybody so we all had swags and just found a corner of the apron to bunk down on after the BBQ and Beer festivities in Kit Thorpe’s Hangar.  Bob Mackinnon slept in the rear locker of the F27.  Lyle remembers going to a nice dark and quiet corner to sleep to find it was also a favourite “dark and quiet” corner for men to ‘’relieve” themselves so he up and moved to a more well lit corner!  Chris Braund had the best idea – which he had obviously used before – he slung a hammock between the undercarriage legs of PNM.

Ron Entsch was headquartered in John Cassidy’s (Airport Director and Race Air Transport Liaison Officer) Cairns office to liaise between 4CA and ATC giving updates on the progress of the fleet.

Nick Watling, the Cairns based Aerial Ambulance pilot (who was also the Vice Chairman of the Race Committee) flew the B58 Baron VH-ATL with an Ambulance Bearer on board for medical coverage for the event. The late Harry Perkins of AWA, who was also a passenger with Nick, got a little tipsy overnight and walked into the wing leading edge of ATL giving the Ambulance Bearer a chance to earn his keep!

Race festivities finished up on Sunday night with the Prize giving ceremony at Cannon Park Race Course where Tom McDonald himself was present. 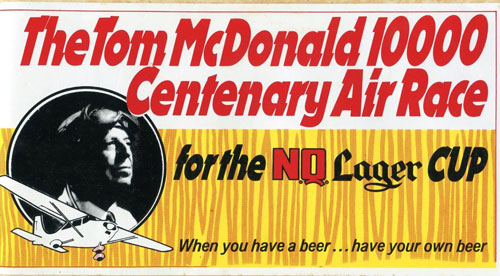 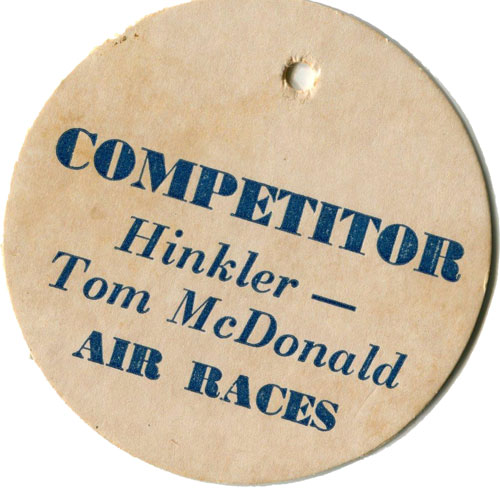