When John Gunn wrote his book The Defeat of Distance, about Qantas between wars, little did he know that that title could easily be applied to the transport of a former Qantas DC3 (C47) from Sydney to Longreach to join the Qantas Founders Outback Museum (QFOM) recently.

When John Williams donated his DC3 VH-BPL, to the QFOM, he gave the museum a worthy addition to its collection.  The 60 year old Douglas airliner not only logged 34,000 hours but had been a Qantas aircraft for a number of years. The machine started in 1942 as 42-93009 with the USAAF. Later it went to the RAAF as A65-44 and after the war became VH-EAP and later VH-EPY with Qantas. In 1960 the aircraft joined TAA as VH-SBG and by 1981 it was VH-BPL with Bush Pilots Airways of Cairns. It made its last flight in January 1993 when it flew into Hoxton Park near Sydney.

Having obtained the Douglas, the QFOM’s big challenge was how to transport it to Longreach. The aircraft was unairworthy and returning it to the air would be far too expensive. The next option was to transport it by road. In stepped Jeff Dobe of Bulldog Transport. Jeff, an aircraft owner, took an interest in the project to move the aircraft to Longreach and with the assistance of Qantas made preparations to move the machine to Queensland.  So the aircraft’s wings and fuselage were secured on a 30m long semi- trailer. This was a real oversize load that measured 5m high and 7.4m wide.

Day one – March 1 and the load had to be moved at night on the Sydney to Newcastle freeway when traffic was quietest. This means 1 am departure from Sydney complete with four escort vehicles. Past Newcastle in the daylight and the convoy travelled via Willow Tree, Gunnedah, Narrabri, Moree and on to Goondiwindi for the first overnight stop. After Newcastle all movement of the convoy had to be done in daylight.

Day two saw the Douglas transported from Goondiwindi via Roma to Mitchell. The plan had been to get past Morven and make the overnight stop at Tambo, but this was not to be. At Amby west of Roma bridgeworks required careful checking of the space available to get the load past the bridge structure. Here Jeff had just millimetres to spare in getting the aircraft past the obstruction. Next the transport team was advised that two bridges up ahead had signs that would have obstructed passage and that they could be removed but at extra cost and time. Already late due to the bridge exercise the convoy stopped overnight at Mitchell well short of the intended Tambo stop. Wisely a scouting escort vehicle went ahead to check the reported signs but found that there were none!

Day three and the Douglas was moving at first light, travelling from Mitchell to Morven, Tambo, Blackall and Barcaldine. As the convoy made its way across country, ABC Radio was getting into the swing of things by giving progress reports on the slow moving aircraft. The convoy finally made it into Longreach just on sunset. The epic journey was over!

Day four March 4, saw the aircraft taken off the trailer and the wings refitted. The work to get the aircraft up to display standard had commenced. The addition of VH-BPL to the QFOM at Longreach will further enhance the story of Qantas while providing a link to the early history of TAA. For those who have not yet as yet been to Longreach to visit the QFOM, it is suggested that you do so as it is fast becoming one of those “must see” places of Australian aeronautical interests.

This DC3 was one of two purchased from Air Niugini in 1981 and was delivered to Cairns on 27 October 1981 (in company with the second aircraft) by former Bushies DC3 Captain Bob Mackinnon and Bushies pilots Ken White, Jim McGowan and Ian Best.  There is a story of this unusual delivery flight and more history on the aircraft in Ron Entsch’s article “2005 DC3 VH-EAP” under the heading Publications.

After an extensive overhaul to convert it to a freighter aircraft it was registered as VH-BPL on 05 October 1982. It remained operational with the company until all DC3s were grounded on 30 Sep 1987 to be sold.  It was the last of the DC3s to be ferried to Brisbane on 29 December 1987.   Air Queensland closed on 30 April 1988. 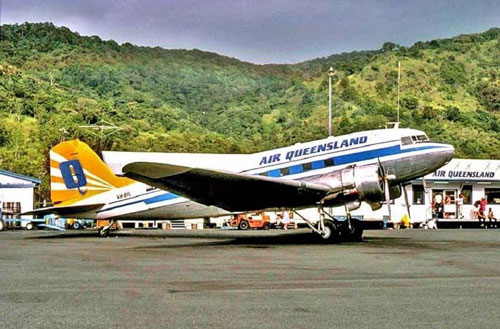