DC3 off the pole. What’s the story?

This aircraft was built in 1943 (Construction Number 12187) and was delivered to the United States Air Force in December of that year.  She was transferred to the RAF UK 24 Squadron as General Maitland Wilson’s personal aircraft “Freedom” – he was at that time, Supreme Allied Commander-in-Chief, Mediterranean.  This aircraft flew King George VI to Italy in 1944 to review the Allied troops.

Since then she was with the Air Command in South East Asia from 1946 until 1949.  Other milestones in her rich history include service with Qantas until 1959 then TAA in Australia and Papua New Guinea and with the Red Cross in Bangkok in 1980.

Bush Pilots Airways bought her in late 1981 from Air Niugini.  On March 12th 1984 she was presented to the Cairns Port Authority by Sir Sydney Williams OBE and the staff of Air Queensland to mark the opening of the new Cairns International Airport to be rigidly mounted on a Pole.

On 11 November 2005 at 11am a Remembrance Service was held under the DC3 on the Pole to commemorate Capt Ernie Girault’s contribution to aviation.  Capt Girault, who died in 2001, was a WW2 pilot and Chief Pilot of Bush Pilots Airways and retired in 1974.  He was a father figure to many young pilots, including Qantas cadets.  He was awarded the Guild of Air Pilots and Air Navigators Grand Masters Australian Medal in 1994.  Ernie’s ashes were scattered under the DC3 at the end of the ceremony.

On Friday 05 September 2008 the DC3 was lowered from the Pole as the Domestic Airport Terminal and surrounds were being expanded.  It was the intention to re-locate the DC3 but once it was down on the ground it was found to be unsalvageable.  After nearly 25 years up on the Pole exposed to salt air and strong wind stresses there was massive corrosion.  One of the propellors is now mounted on the wall opposite the Aviation Pioneers Display upstairs (via the escalators) in the Cairns Domestic Airport Terminal – just before the Airline Lounges.

Former General Manager of Bush Pilots Airways Ron Entsch said DC3 aircraft had made a remarkable contribution to aviation around the world and particularly the Far North.

Under the heading Publications/Ron Entsch there is an article by Ron titled “2005 DC3 VH-EAP” – on pages 7-10 there is the interesting story by former Bushies DC3 Captain Bob Mackinnon of the ferry flight from Port Moresby to Cairns in 1981 of this aircraft that ended up on the Pole. 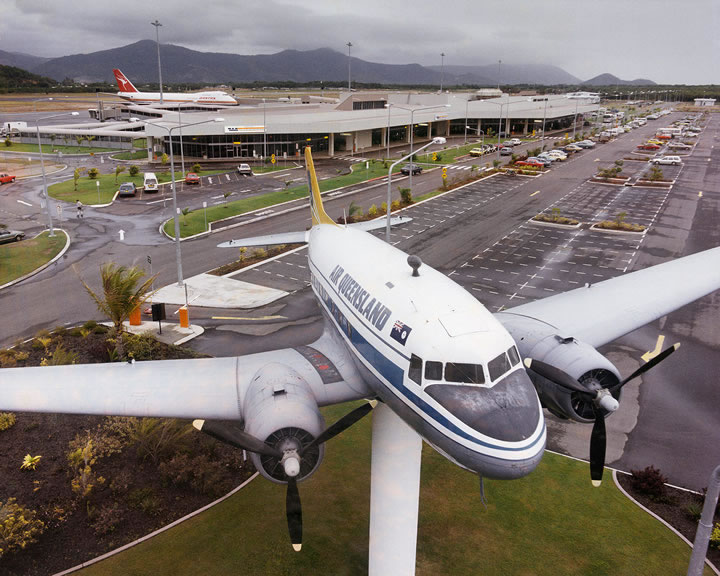 DC3 on and off the pole – CLICK IMAGES BELOW TO VIEW